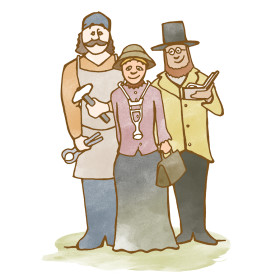 When EB Herz was 15 years old, he felt through the ice of Cold Brook and came out with a plum-sized nugget of gold in his hands. This was the inspiration he was looking for and a year later, he set off to 'them thar hills' to make it rich as a prospector. What he found, however, was that his gift was one of leadership and achievement.

EB is the ambitious "businessman" of Dry Gables, the one who succeeds at whatever he chooses, and looks good doing it.

Introduction Part One: A Single Stack of Stones

Dry Gables
In the very first Dry Gables story, J.B. Bauer, the tone's stone mason and sculptor, tells us all about the magical way the town was founded.
30 min
8+

Dry Gables
Three people looking for a place to be appreciated for their unique gifts muster great courage to leave South Dakota in search of a perfect place to call home.
25 min
8+

Dry Gables
The Bauer family is looking for a place to live with independence and freedom and they traverse America before founding the town of Dry Gables.
22 min
8+

Dry Gables
Johann Bauer is not only the Dry Gables blacksmith — he is also the town's protector, and when someone new comes to town he is at first suspicious, but then comes to see him in a different light.
29 min
8+

Dry Gables
This is a love story about the dry goods proprietors of Dry Gables, Franz and Lena Denken —two dedicated, loyal members of the township.
28 min
8+

Dry Gables
Max Denken prides himself on being precise and measured in all things, but when Dry Gables encounters trouble, he finds he can also be passionate and courageous.
35 min
8+

Dry Gables
Liesl Herz, the nurse of Dry Gables, suddenly becomes ill and finds herself the patient instead of the caregiver.
26 min
8+

Dry Gables
Seamus O'Conner is the elementary school teacher of Dry gables, and as a lifelong "dreamer" he sometimes find it hard to be his true self.
35 min
8+

Dry Gables
Marta Bauer's bakery is a natural peacemaker and the people of Dry Gables know that if they visit with her at her bakery, they will find a way to work out their conflicts.
24 min
8+

Dry Gables
Wilhelm Bauer is an efficient, elegant and nearly perfect designer and chief builder in Dry Gables, but the boisterous Bronislav points out one flaw in his work...
34 min
8+

Dry Gables
Inspired by his first gold find at 15 years old, EB Herz set off to become a prospector but found his real skill was leadership.
34 min
8+

Dry Gables
Jane Meyer has always longed for new experiences and at age 16 she begins a life of adventure, including winning the fastest horse in the Dakota Territory!
27 min
8+