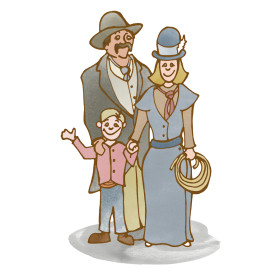 Something Greater Than Myself

EB Herz is a young man with great ambition but isn't sure where to place it. He tries being a newspaperman, then a tavern owner, then an investor but none of it seemws right — none of it seemed like a match for his abilities and his dreams. But when his friend and mentor Franz Denken suggests he run for town mayor, young EB has a transformative realization that where he really wants to put his talents, abilities, and ambition ... is in the care of his community. 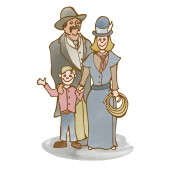 Whatever Power I Have

When Johann loses a friend in battle he is understandably angry and ready for revenge, but Liesl, the town's nurse, helps him redirect his energy to help others.
31 min
8+

Marta the town baker is loved by everyone, but her tendency to put things off and be indecisive can be frustrating. Will these traits prevent her from getting EB's birthday cake done in time?
29 min
8+

As I Truly Am

Liesl Hertz is very upset by the arrival of a "snake-oil" salesman who has arrived in town. Her husband helps her to think through her feelings before overreacting.
33 min
8+

When Wide is Not Enough

Jane wants to convince everyone in town that they need an automobile, but first she has to learn all about them, and in the process, she learns about herself.
34 min
8+

What Nothing Can Bring

Lena Denken makes sure everyone in Dry Gables has a very special and celebrated birthday, but can she let go of worries and "to do's" and enjoy her own?
24 min
8+

Max Denken has a mission to uncover the truth about gold tycoon, George Hearst, but he needs some help from his friend, Johann to get the job done.
36 min
8+

Get Your Ducks in a Row

Seamus the school teacher was just as excited for the first day of school as the children. Until things started to go wrong and he wondered "am I the right man for the job?"
31 min
8+

Something Greater Than Myself

EB Hertz has tried being many different things, but it isn't until his friend Franz suggests that he run for mayor that he fiends his true calling... caring for his community.
31 min
8+

A Great Burden is Lifted

When Wilhelm finds out his wife, Jane, is going to have a baby he is overwhelmed by uncertainty, but with some new planning and a little fun, his uncertainty turns to excitement.
37 min
8+