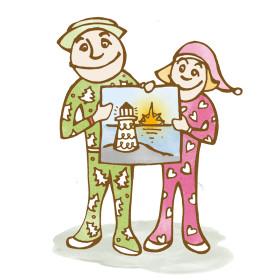 This story is Day Eleven: Feast of Eleven Sails.

On the eleventh day of Christmas, the children learn that Andy has to return to Connecticut. This means King’s Night Barn Dance — planned for Twelftnight — is no longer going to include music and dancing. Brother and sister are deeply disappointed — disappointed that the King’s night event won’t be what they expected and disappointed that Andy won’t be there. They don’t like feeling disappointed and sad, but Momma encourages them to honor their feelings.

From “Twelve Tales of a Tullyport Christmas”: “The Feast of the Eleven Sails”

Long ago, an incredible thing happened on the eleventh day of Christmas in Tullyport. Eleven enormous ships appeared off the coast, set off-course by a large winter storm. The families of Tullyport gathered torches and lanterns, and lined the coast, guiding the lost ships to safety. But when the ships set sail from England, there were twelve. Where is the twelfth? Could its captain have guided it to Boston despite the storm? This experience inspired a yearly Christmas feast, to celebrate both the great joys of the year, as well as the hardships.

This story emphasizes the importance of acknowledging the losses and disappointments of the year, as well as the joys and successes.