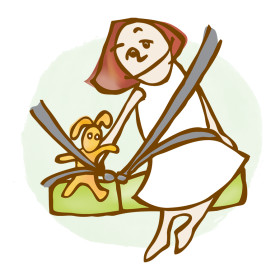 This episode of Sparkle Car features an original story from our "Martin & Sylvia" series called:

When Sylvia learns about how people used to travel by train, she excitedly hopes she can ride one as well.  Daddy finds out that there is a station nearby where they can hop on a train and ride it almost all day long.  Brother and sister jump at the chance - thinking about sleeping cars, dining cars, circus cars and firemen shoveling coal.  They are surprised, however, at their favorite part of riding a train...

A little boy from a time-gone-by gets to watch a real fireman feed the fire of a real steam engine.  This tale is filled with beautiful images of what life was like on a steam train.

, an imaginative description of the life of John Chapman better known as 'Johnny Appleseed' (as mentioned in the Martin & Sylvia story "A Ride on a Train"!).

And "The Travels of a Fox", an old English folk tale about a fox who travels from house to house gaining value in his traveling bag until he pushes it too far and meets up with the wrong animal.