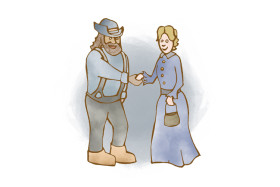 In the summer of 1895, a storm came to Dry Gables that nearly upended the town: a storm of politics. A new political party called “The People’s Party” sent two representatives to Dry Gables to gain support, but they got a lot more than that.

Part One: Candidate Bauer When Wilhelm Bauer listened to the enrolling tones of the People’s Party representative Jimmy Field, he found himself agreeing wholeheartedly in the party’s platform. Its reform policies spoke to his core belief that this country could do better governing its people. So, to the surprise of his friends and family, he decided to run for congress.

Part Two: The Denkens and the Machine Franz and Lena Denken were deeply concerned about the future when the Fields came to town. They worried about how the local farmers and business people were going to compete with big business that was sweeping the country. When they heard the message of hope from Jimmy, they immediately saw the answer to their anxiety — the People’s Party!

Part Three: The Tireless Campaign of Liesl Herz When Liesl heard Jimmy Fields speak she wondered how she could help. But after Max suggested Wilhelm run, she knew exactly her role: she would be his campaign manager. So in addition to her daily responsibilities of keeping the citizens of Dry Gables healthy, she jumped headfirst into the world of politics — working long hours and traveling county to county for her candidate. And on election day, when she could finally relax and enjoy the results, she realized what she had truly accomplished.

This is Our Moment

Dry Gables: Good Neighbors
Seamus the town school teacher and theater director encounters resistance as he tries to enroll help from others to bring his favorite playwright to town to see the Dry Gables theater production.
50 min
8+

Weathering the Storm: Our Final Story Together

Dry Gables: Good Neighbors
John Bauer recalls the Great Schoolhouse Blizzard of the Dakota Plains and how the community pulled together to survive the storm using their own unique gifts.
33 min
8+

Dry Gables: Good Neighbors
In the summer of 1895 a new political party called "The People's Party" inspires citizens of Dry Gables to get involved in politics in order to steer the town in the right direction.
52 min
8+

Dry Gables: Good Neighbors
The leaders of Dry Gables encounter various challenges as they try to make the town an official part of South Dakota. They find that working together helps them each accomplish their individual goals.
56 min
8+